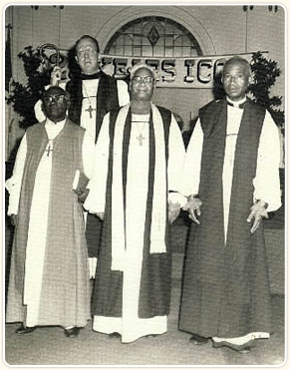 The Anglican Orthodox Church was organized on November 16, 1963 by the Most Reverend James Parker Dees, B.D., D.D. to preserve the basic tenets of Anglicanism, namely:

The Anglican Orthodox Church was established by the Most Reverend James Parker Dees, who was a priest, and others who saw that the Episcopal Church was rapidly repudiating its foundations. They wanted to preserve their traditions of Anglicanism as held by the Episcopal Church until recent years. The above founding members trained their people in the Bible, the 39 Articles of Religion, and the Book of Common Prayer. These Churches all continue to be members of a Worldwide Communion that is under the auspices of the Anglican Orthodox Church with International Headquarters in Statesville, North Carolina, USA.

The Anglican Orthodox Church focuses worship on God as He has commanded. The Bible makes it plain that individuals cannot come before God in their own right, because of the sinful nature of men who have disobeyed Him.

The Bible also makes plain that God has wrought in history a great program of salvation by which sinners are forgiven and again brought into communion with Him. That program is centered on the work of Jesus the Son of God, who was born of the virgin Mary in order that He might become our representative before God living for us bearing in His death the punishment for our sin.

Jesus declared, “No man cometh unto the Father but by me.”